"By the end of this powerhouse novel, we all feel as if we've been hit by a series of trains headed by Gann's robust mastery of language and imagery. This just doesn't feel like a first novel. It has the style and grace of an artist who has grown large, and the strength and confidence of an author well aware of his talents.... This novel is packed with genuine feeling and brilliant insights. It is not for the faint of heart, people afraid they might encounter a character too close to their own, or readers who want a book they can pick up only on occasion.... This book is alive and it has teeth—big ones."
—Edmund August, The Courier-Journal

What Readers Are Saying

"Read your book on the train from Chicago to NYC and WOW was it perfect company!! I loved the second-person section--and everything else around it. Your language! I want to roll around in it; it's so beautiful/powerful. You put me in a writing mood and that only happens to me when I read something literary with exquisite sentences and real, human characters ... a book like Parade."

—a reader from New York

"I just finished your novel—it's fantastic—clean and moving and funny and real and confident in its voice. Simply terrific. You are a real talent." 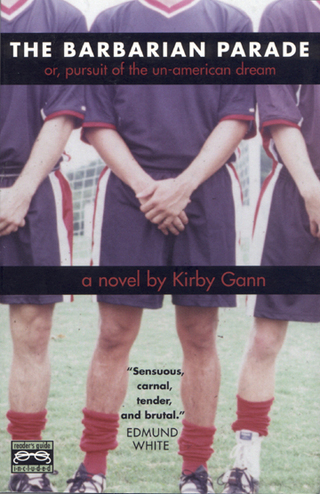 "For its technical skill, creative use of symbolism and themes, and craft of language I recommend Gann's novel to readers who enjoy their literature gritty.... [The Barbarian Parade] will spawn literary discussions about life, love, loss, sorrow, pain, and the traumatic changes from boyhood to manhood."

“Kirby Gann has written an evocative, gripping, and fearless first novel, one that peers out of the eyes of a child upon a very adult world. If you have ever watched a tornado snake out of a dark cloud, or a skydiver fall with a tangle chute, then you know what it is like to be utterly transfixed; Gann’s novel holds the reader in much the same way; he turns us into children watching mayhem, transfixed, horrified, and yet filled with wonder, a part of us not wanting the tornado to recede, not wanting the chute to open.”

—Lee Durkee, author of Rides of the Midway

“Gann has a great story to tell, one that is by turns sensuous, carnal, tender, and often brutal. With its original theme and beautiful, yet effortlessly composed language, The Barbarian Parade makes a striking debut for a novelist of daring creativity and passion.”


—Edmund White, A Boy's Own Story

“Kirby Gann’s fearless first novel X-rays middle-class American youth as neglected by parents and seduced by the woman-using values of American sports. Far more distressing than The Catcher in the Rye but just as well-written, The Barbarian Parade is a compelling and memorable read.”

“A soulful excavation around the foundation of a young life teetering but still standing, with all the requisite familial heartbreak, busted balls, and self-inflicted wounds that would tumble lesser erections. Gann pours it on, and the acceleration of this first novel ramped up this reader to see the next installment.”

“Kirby Gann’s exciting debut, a brave and buoyant bildungsroman, tells one Kentucky boy’s own story, with balls and heart and a fiery, hell-bent prose. Rousing and brutal, tender and wise, The Barbarian Parade is an original--a picaresque novel of and for our time.”

“The Barbarian Parade pulls off an astonishing feat: it’s simultaneously hilarious and heartbreaking, evocative but never nostalgic, touching but never sentimental, and it manages to be not only poetic, but a great page-turner as well. Gabriel Toure is a remarkable character and this is a remarkable debut. Kirby Gann is an author who can go the distance.”


—Silas House, A Parchment of Leaves

“Kirby Gann’s first novel marks the debut of an important and vigorous new voice in fiction. This is so very much more than a coming-of-age story--it’s real, and moving, and true in the sense that good fiction is true: we see ourselves here, whether we like it or not.”